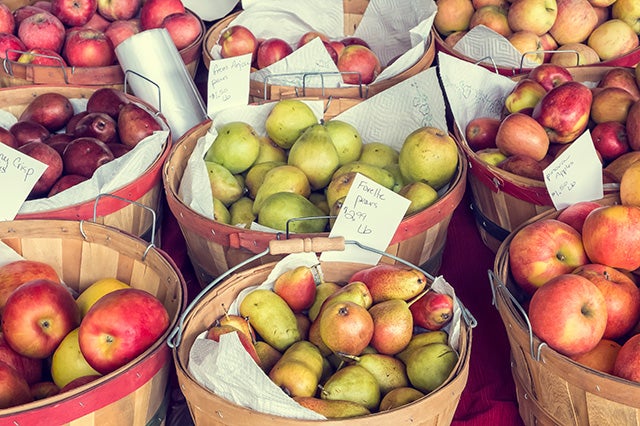 GourmetGiftBaskets.com calls New Hampshire home, and with fall coming up fast that means two very important things for New England: leaf peeping and apple picking! Our neighbor state, Massachusetts, is home to Johnny Appleseed himself, the legendary pioneer who brought apple trees and nurseries to large parts of Pennsylvania, Ohio, Indiana, and Illinois. There is nothing quite like picking an apple from the tree yourself and biting right into it! It doesn’t get much fresher than that, and apples direct from the orchard just taste so much sweeter, juicier, and crisper than what you find in the store.


But, believe it or not, the apples you know and love didn’t originate in New England! Even though American orchards are now known the world over for dozens of delicious varieties, apple trees first originated in Central Asia (primarily Turkey), where their wild ancestor, Malus sieversii, is still found today. The first apple orchard in North American was planted in Boston by Reverend William Blaxton in 1625.

In 2010, Italian researchers and horticultural genomicists at Washington State University, decoded the entire genome of the Golden Delicious Apple. It had about 57,000 genes, the highest number of any plant genome studied to date and more even genes than the human genome (which is about 30,000).

Biologists and botanists believe that the apple tree was perhaps the earliest tree to be cultivated by humans, and through thousands of years of selective breeding we ended up with 7,500 apple varieties, all from that one wild tree. The only apples native to North America are crab apples, which were never seriously cultivated by Native Americans, unlike those varieties that were cultivated and breed across the rest of the world. But those crab apple trees were eventually cross-bred with European varieties brought over by the colonists to create totally new apple species that we still eat today.

Today, the United States is the world’s second largest producer of apples (China is the first). Not too bad for a country that’s only been growing apples for less than 400 years!

As for the phrase “an apple a day keeps the doctor away?” Researchers have found that “prescribing an apple a day to all adults aged 50 and over would prevent or delay around 8,500 vascular deaths such as heart attacks and strokes every year in the UK.” Send someone you love a gift basket stuffed with apples today and give them a taste of fall.