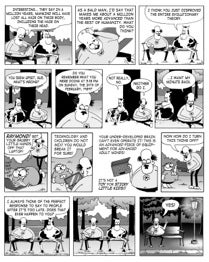 Cartoon Dads on comic strips and TV have entertained Americans for generations. Here are our top 10! And in just a couple of weeks, we will be celebrating your Dad on Father’s Day! Do you know what you’re getting dad for Father’s Day? Take some time to pick out a Father’s Day gift.

Decades ago there was Bringing Up Father© with Jiggs as the wealthy Dad patiently fulfilling his fatherly duties. (If you’re under 50, you probably have never seen him.)

Pappy Yokum from the cartoon strip L’il Abner© was notoriously lazy as the patriarch of the Yokum family who had to be given a bath by his wife, Mammy Yokum.

Bill, the father on Family Circus©, is the cartoon father (oddly enough a cartoonist himself) of the children Billy, Dolly, Jeffy, and P.J. who spends a lot of his time following dotted lines.

In the Dennis the Menace© cartoon, Henry Mitchell has the dubious responsibility of extracting Dennis from his many fixes.

The title character from Hagar the Horrible© finds himself between the rock (his wife) and the hard place (his teenage daughter) when he is not out pillaging with his crew of fearless (?) Vikings.

Jor-El is the serious (and therefore not a bit funny) futuristic father who had the good sense to load his baby son into a space capsule and send the future Superman© to earth.

It is impossible to write about cartoon Dads without mentioning the befuddled Dagwood Bumstead from the cartoon strip, Blondie©. When Dagwood is not eating, napping, or getting caught in the bathtub by the neighbor kid, Elmo, he is most often seen doing what Dads are expected to do—handing out greenbacks to his teenage kids, Cookie, and Alexander.

Coming in at second place is a toss-up between clueless father, Peter Griffin in Family Guy©, and the dull Hank Hill in (oddly enough) King of the Hill. With fathers like these two, there’s not much hope for the future generation.

Still, the funniest of goof-ball Dads in Cartoon World is the big-hearted but dim-witted Homer Simpson whose son Bart takes following Dad as a role model to new and horrifying depths. Homer is often caught (literally) with his pants down, possibly why Bart has a habit of mooning people he is cross with.