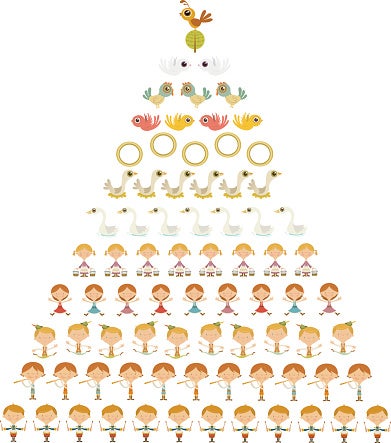 The Twelve Days of Christmas Song is Misleading

Originally this British children’s song began as a memory-and-forfeit game. The rules of the game were simple: each child took a turn recalling the verses the previous child sung, then they added a new verse to the end. If a child forgot a verse, they had to pay a forfeit that typically involved kissing or giving the other children candy. So what does this odd repetitive jingle about rings, geese, and milking maids have to do with the days leading up to January 6th?

Well, one theory is the carol “The Twelve Days of Christmas” was created by Catholics between 1558-1829. Since it was a crime to be a Catholic in Anglican England, many believe the song was created as a coded way for Catholics to learn the catechism (a summary of the principles of the Catholic religion). This idea was debunked by David Mikkelson for Snopes. In case you are curious, here’s David’s translation of the supposed symbolism:

The Real Meaning of The Twelve Days of Christmas

Now that we have cleared up when these twelve days are, you might still be confused why the twelve days are not the days leading up to Christmas? Are you ready to find out what the song is actually referring to? I thought so! The Twelve Days of Christmas is the time period between the birth of Christ on December 25th and the coming of the Magi (also known as the three wise men), the Epiphany, or Three Kings’ Day on January 6th.

So while you are ringing in the New Year, impress your friends with this tantalizing Christmas carol trivia! And remember to bring a gift to your party hosts. We’ve been told these virtual celebration gifts make the perfect gifts for untraditional virtual parties and these New Year’s party gifts make great in-person party host gifts.

© Featured Photo by quisp65 from iStock by Getty Images