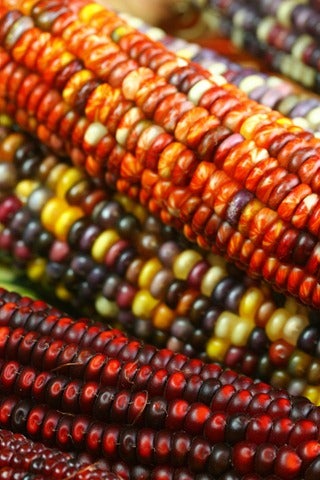 While Thanksgiving dinner fare varies from family to family, usually, you’ll find turkey, mashed potatoes, gravy, cranberry sauce, and corn. There is little written documentation about what food they ate at the First Thanksgiving dinner, but we know there are two main dishes from modern-day Thanksgiving. The Pilgrims served turkey and corn.

Turkey and Other Wild Beasts

Evidence suggests the Pilgrims ate wild turkey at the first Thanksgiving dinner. It most likely wasn’t the main course. Duck or goose was more than likely the wildfowl served as the main meal. The Pilgrims prepared other meats such as venison (deer meat). The modern Thanksgiving cuisine evolved during the mid-1800s in the United States. There was a renaissance of the history of colonial America at the time, and it was then in the 19th century that the Thanksgiving Day dinner with turkey and potatoes became a tradition.

Corn was on the table at the first Thanksgiving dinner and continues to be a staple of the holiday today. Edward Winslow, one of the founders of Plymouth Colony, wrote that the spring before Thanksgiving, the settlers planted 20 acres of Indian corn (also known as flint corn). The abundant crop was served for the very first time that fall, for Thanksgiving.