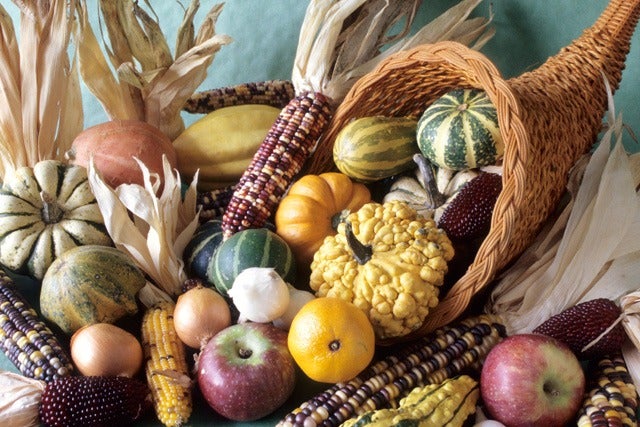 There are two Greek myths that explain how the Story of the Cornucopia. The first is that while hiding from his father, Kronos. Baby Zeus accidentally broke off the horn of the goat who nursed him. The horn then had the divine power to provide unending nourishment. The goat was revered by Zeus and was placed in the sky as the constellation Capricorn.

The second creation myth is that Hercules (the demigod son of Zeus), broke the horn of the river god, Achelous, during a battle. The cornucopia then became a symbol of harvest and prosperity and was associated with two goddesses. The earth Titan Gaia, the Greek goddess of luck, and Annona, goddess of the grain supply to the city of Rome. Since then the cornucopia has been a sign of plenty. In fact, cornu, means horn and copia, means plenty in Latin.

Drinking from horns was common in Bronze Age Mycenaean Greece, and in cultures all over the world, including the Vikings, the Germanic tribes, the Celts, and Romans. Lavishly decorated drinking horns made from ivory with gold, silver, and enamel decorations were produced as luxury items in 19th to early 20th century imperial Austria and Germany. These extravagant vessels were designed to mimic the mythological cornucopia.

What is a Cornucopia Today?

The modern cornucopia is typically a hollow, horn-shaped wicker basket filled with festive fruit and vegetables and has become closely tied to Thanksgiving. The first Thanksgiving was actually a celebration of the fall harvest and was a three-day festival between the Puritan Pilgrims and the Native Americans. It only became an official, national holiday when Lincoln was President. In 1863, Lincoln actually declared two national Thanksgivings that year, one for August 6th to celebrate the victory at Gettysburg and a second for the last Thursday in November. But it wasn’t until 1941 that Congress permanently established the holiday as the fourth Thursday in the month.

You can easily make your own cornucopia this Thanksgiving as a beautiful centerpiece for your table. Simply buy a ready-made cornucopia from your local craft store. They come in a variety of sizes so you can make a big horn of plenty as the centerpiece for a large table. Or, a few smaller ones to spread around your house. You can also create your own horn out of wire, aluminum foil, and burlap.

What Goes In a Cornucopia?

You can stuff the cornucopia with leaves, branches, acorns, miniature pumpkins, gourds, and cranberries! And don’t be afraid to overstuff your cornucopia. The idea is to create a horn of plenty, so you want it to spill out onto the table!