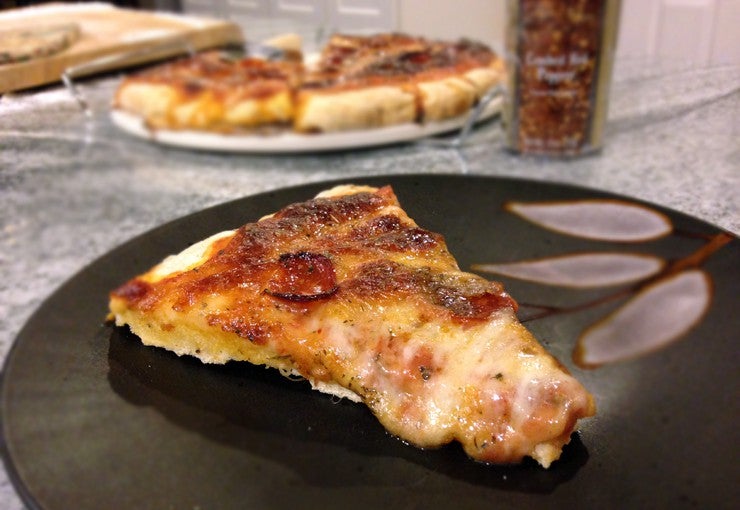 Like most people, I love pizza. Takeout pizza, homemade pizza, grilled pizza – you name it, I’ll take them all. While I do make pizza at home frequently, I didn’t own a pizza stone so I borrowed one to see if I prefer pizza on the stone or how I’d been cooking it all along (either in a sheet pan or directly on the grill grates). Given that I’d never used one before, I did some Googling. So now think I have some good tips for all of you out there who haven’t used one either.

First, I made a pizza on the stone in my oven while I let the dough rise. Once I was ready to start assembling the pizza, I placed the pizza stone in the cold oven and heated it to 450° Fahrenheit. You must ALWAYS place a pizza stone in a cold oven and slowly let it come up to temperature – if you place it in an oven that’s already preheated, it will crack and we don’t want that. I saw other sites suggest 500° or even to just put it at the highest your oven will allow, but the stone I have says 450° and it worked just fine. You want the stone to preheat for at least 15 minutes before you try to cook the pizza to ensure the stone is good and hot and will cook the crust properly. I’ve seen sites that tell you it has to be in the oven for an hour and that just seems unnecessary. I found that the 15 minutes was plenty.

I do not own a pizza peel so I rolled out my dough on a heavily floured, large cutting board so I could sort of slide it off onto the stone when I was ready to pop it in the oven. Let me tell you, this method is challenging and a pizza peel would have been EXTREMELY handy. I think the hassle of getting the dough from the floured cutting board to the hot stone would be a cinch with this. Even without it, I managed to get it on there.

Another tip – the pizza stone I used is 12” and my dough went almost to the edges. This isn’t a huge deal, except the sauce leaked over the stone and onto my oven. Luckily, I had the foresight (thanks to my husband) to put a sheet pan underneath the stone to catch the drips so I would recommend either making sure you have a pan under it or trying not to have the sauce go anywhere near the edges. I did try to mound the crust part of the pizza up so to limit the run-off, but this apparently did not work the best so learn from my mistakes 🙂

The stone instructions said that it would take 10-12 minutes and to watch for the edges of the crust browning. This was right on the money as it took about 10 minutes in my oven. The pizza stone instructions did say to not to cook over an open flame. But I’ve seen articles about how to use a pizza stone on the grill, so I gave it a try. I’m here to tell you that nothing broke and the pizza came out fabulous.

Just like when in the oven, you need to slowly get the stone up to temperature to prevent cracking. Place the stone on the cold grill grates, then turn on medium heat, close the grill cover and let preheat for at least 15 minutes. Assemble your pizza on a floured cutting board (or ideally use a pizza peel!!) and slide onto the pizza stone after the stone has preheated. Let cook with the grill cover closed for 10-15 minutes. You want the edges to brown. It took closer to 15 minutes to get my desired level of doneness.

I had less of an issue on the grill with toppings and sauce sliding off. I don’t know if this is because I learned from my mistakes, or if less dough rising happens on the grill.

Pizza stones are porous, so do not clean them with soap or your next pizza will taste like dish detergent! Cool the stone completely before you attempt to clean  and scrape it with a stiff brush and hot water. It’s normal for the stone to become discolored so do not be concerned about that. It’s kind of like caring for a cast iron pan, you want it to be seasoned. Also, the more you use your stone, the easier pizzas will remove from the stone’s surface after cooking. Of course, these were my first two attempts and the oven one really got some sauce and cheese caked on. It will likely be a few more times before mine is really non-stick. But I am willing to continue testing this out 🙂

Overall, I had fun using the pizza stone and I really loved the grilled pizza flavor. I still prefer the taste of putting the dough directly on the grates, but I enjoyed these pizzas too. Of the pizza stone methods, I liked the grill better, but this is a matter of personal preference and taste. If you don’t have one stowed away in your kitchen, get one! And start making some homemade pizza stone pizza!