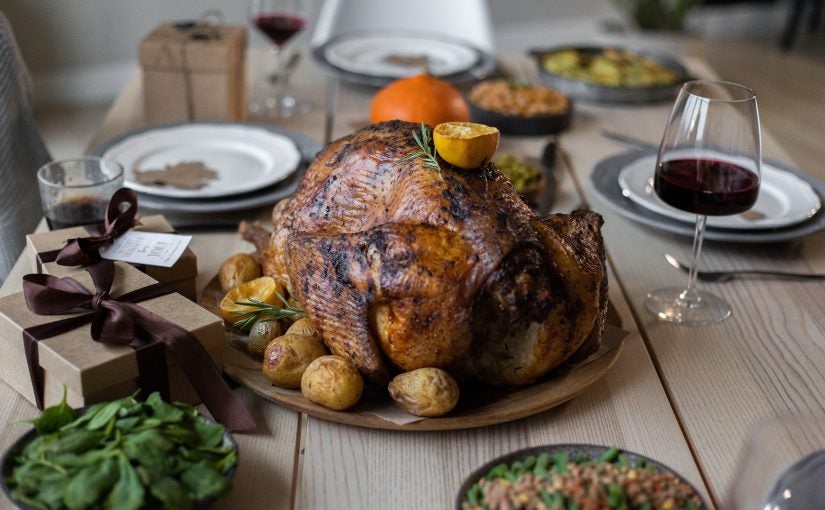 One theory is that Queen Elizabeth was feasting on roast goose during a harvest festival. When the news was delivered to her that the Spanish Armada had sunk on its way to attack England, the queen was so pleased that she order a second goose to celebrate the news. Thus, the goose became the favored bird to dine on during harvest time in England. Once the Pilgrims arrived (and survived that first winter), roasted turkey eventually replaced the roast goose as the season’s celebratory cuisine. Turkeys were more abundant and easier to find than geese.

William Bradford, the governor at the first Thanksgiving, wrote in his diary that “our harvest being gotten in, our governor sent four men on fowling, that so we might after a special manner rejoice together after we had gathered the fruit of our labors. They four in one day killed as much fowl as, with a little help beside, served the company almost a week. …And besides waterfowl, there was a great store of wild turkeys, of which they took many, besides venison, etc.” Those diaries were lost and not rediscovered until 1856. But when President Lincoln declared Thanksgiving a national holiday, proponents of the holiday promoted turkey as the meal’s centerpiece.

Practically, a turkey is much larger than a chicken or a duck and can easily feed a large family. If you had to hunt your own dinner wouldn’t you want the most meat possible?! Since turkeys weren’t as useful as a cow (milk) or chicken (eggs), there was less hesitancy to cook a turkey for Thanksgiving dinner! A 2007 piece in Slate also pointed out that the publication of A Christmas Carol in 1843 may have helped the turkey’s cause as a holiday delicacy when Scrooge sends the Cratchit family a Christmas turkey.

Biologically speaking, turkeys are born in the spring season and take about 9 months to mature. The perfect feasting size in the fall because they can easily weigh 10 pounds. Although commercially produced turkeys can weigh anywhere from 15 to 20+ pounds.

© Photo by Monstera from Pexels