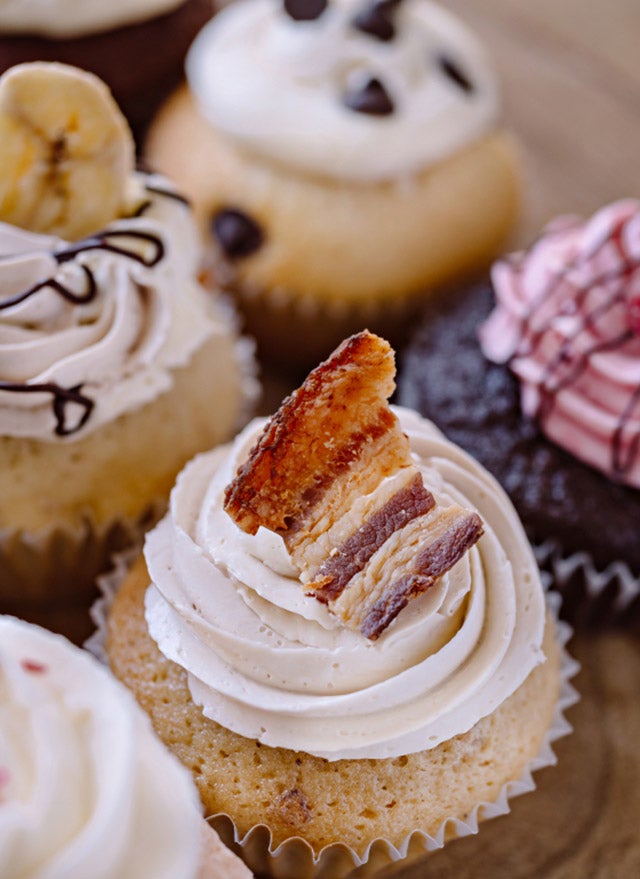 When most people think of cupcakes they envision chocolate and vanilla cakes with delicious and creamy frosting. Maybe even a few sprinkles if they are feeling festive! But for the last few years cupcakes have undergone a major makeover. Both The Wall Street Journal and Food and Wine said that savory cupcakes, specifically lasagna cupcakes (created by LA-based catering company Heirloom-LA), were the hot trend in baking all the way back in 2011. So it’s out with the sweet and in with the savory! Here are some of the more interesting savory cupcake flavor combinations that we’ve found.

At the Meatloaf Bakery in Chicago Cynthia Kallile created the Chili Chili Bang Bang, in which she tops a cupcake-shaped mini-meatloaf (prepared with ground beef and beans) with fresh baked cheddar cheese cornbread. It’s certainly a much more beautiful presentation than the usual meatloaf your grandma used to make. Other meatloaf cupcakes used mashed potatoes as the whipped cream.

This ain’t your momma’s red velvet cake! In the Tuck Shop, baker Mitch Hoverman uses an actual beet cake (the red in red velvet used to come from beet juice) topped with a goat cheese-horseradish whipped cream and pink peppercorns. That would be quite the surprise bite if you were expecting a sweet cupcake!

If you love Indian food than this is the cupcake for you! At the Republic of Cake in Orinda, California the Veggie Curry cupcake is a curried buttermilk cake filled with peas, carrots and roast potatoes and topped with a cucumber yogurt “frosting.” The Food Network has a recipe for a 100% vegan curry cupcake with Brussels sprouts. Not a bad way to trick your kids into eating their vegetables, right?

Maybe it’s a muffin, maybe it’s a cupcake, but either way it’s mac & cheese so who is going to say no?! These baked mac and cheese cupcakes are a great appetizer or potluck dish.

All of these savory cupcakes have people wondering, what exactly is a cupcake? Can it still be a cupcake if it actually uses a muffin-type dough, or something way outside of the traditional cupcake box like a wonton wrapper or tortilla? Would you be willing to make dinner in your cupcake tin?

Of course, even if you aren’t much into baking you can still surprise someone with a delicious basket of baked goods