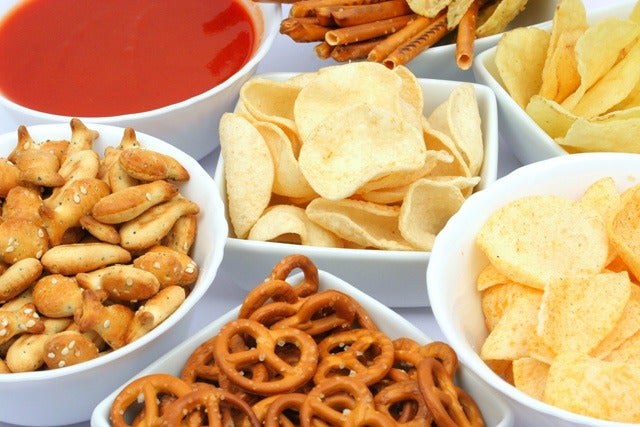 You’ve probably never given too much thought to how that candy ended up at the checkout counter, but your favorite snack foods all have a story behind them and some really interesting histories any snack fan should know about!


Pringles Aren’t Potato Chips
Pringles actually only have about 42% potato content. The other 58% is made of wheat starch and a mix of flours including potato, corn, and rice. The USDA actually ruled that Pringles couldn’t call their product a “potato chip” because it’s NOT mostly made from potatoes. Instead, Pringles call them “potato crisps,” although in July 2008 in the London High Court, P&G (the parent company) lawyers argued that Pringles were not crisps BECAUSE the potato content was only 42% and their shape “is not found in nature”. This exempted Pringles from the then 17.5% VAT for potato crisps and potato-derived snacks.

You Can Get Addicted to Salt
If you’re like me, once a bag of potato chips is opened (I prefer Cape Cod Kettle chips), it’s really hard to stop eating them! Why? Because we are actually addicted to salt! Studies from as far back as 1991 show that salt activates the same neurological pathways that narcotics do, triggering the brains pleasure center. The average person eats 96 bags, or about 6 pounds of potato chips each year, so at least I know I am not alone!

Unlike sugar, which all babies love from birth, salt is an acquired taste. Kids who are exposed to salty foods before six months start to prefer salted over unsalted foods, while kids who arent exposed dont. So you are a salt fiend you can blame your parents!

How Do Pop Rocks Pop?
When Pop Rocks hit the market in 1975, they were using cutting-edge candy technology to make those rocks pop! Most hard candy is nothing more than a sugar-water mixture, but with Pop Rocks the sugar-water syrup is mixed with pressurized carbon dioxide gas (roughly 600 pounds per square inch!), That carbon dioxide forms tiny, pressurized bubbles in the candy. Once it cools, the pressure is released and the larger piece of candy shatters, but pieces still contain those pressurized bubbles. These little pieces then melt in your mouth as you eat them, releasing the bubbles with a loud pop, which is just the sound of the pressurized air escaping.

One Man Made a Lot of Snacks
Dr. William A. “Bill” Mitchell was an American food chemist who worked for the General Foods Corporation and invented Pop Rocks, Tang, quick-set Jell-O, Cool Whip, and powdered egg whites. And for the record, Tang was NOT invented for NASA. It was introduced in 1959 to the public, but it’s use on the 1965 Gemini flight (as a way to improve the filtered water’s taste) is what made it popular.

Lifesavers Spark!
The English scholar Francis Bacon wrote in 1620, It is well known that all sugar, whether candied or plain, if it be hard, will sparkle when broken or scraped in the dark. Basically, when sugar crystals are crushed, they emit an electrical discharge that can excite molecules near the discharge, such as nitrogen in the air, which will then in turn make them give off various types of light while they are in this excited state. Most of this “light” is invisible to the human eye. But when you bite into Lifesavers, the electrical discharge excites the nitrogen in the air, producing mostly ultraviolet light. But then that is absorbed by the methyl salicylate (oil of wintergreen), which then emits light in the visible spectrum, creating that visible flash.