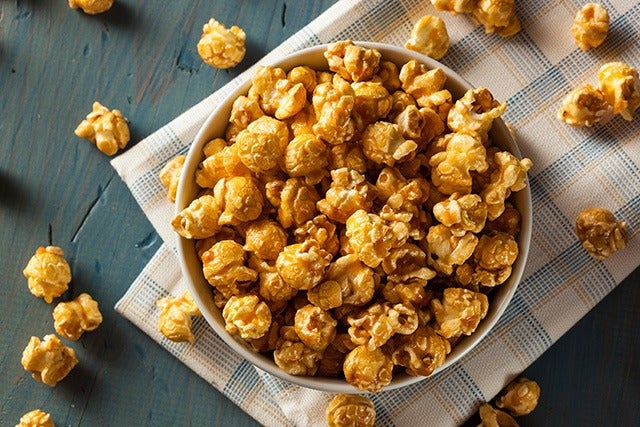 The name “popcorn” is pretty much self-explanatory. It is corn that has been popped. So how exactly does corn go from its natural state on the cob to a puffed crunchy and airy piece of popcorn? The answer lies within the type of corn used.

Popcorn (or Zea Mays Everta)
The four most common types of corn are:

Popcorn is a specific cultivated strain of corn whose scientific name is Zea mays everta. While there are a few species of wild corn that pop, Popcorn is the only type of corn among the four most common that pops and is cultivated specifically for this purpose. The truth is you cannot just grab any ear of corn, strip off the kernels and heat them up to create popcorn. Popcorn (the snack) is created by heating kernels of popcorn (the corn).

How It Pops
Popcorn kernels are different from other types of corn as each kernel contains a small amount of water and oil in addition to starch that is stored within the kernel’s hard, outer hull or shell. When heated, the moisture inside the kernel turns into steam and becomes pressurized on the inside of the kernel’s hull. Soon the pressure builds and forces the hull to break, which creates the iconic popping sound. When the kernel pops the starch and protein inside the kernel pushes outward through the hull and becomes the white and fluffy part of the popcorn that we know and love.

Ways to Pop Popcorn
While many of us get our popcorn from microwavable bags, popcorn can be created through a variety of methods. The most common type of popping is by using a pot with a lid and a stovetop or heat source. After placing a small amount of oil into the pot, you add the kernels and heat – just make sure to keep your hand on the lid to keep the lid from flying off the pot. Other methods include air poppers that used super-heated air to force the kernels to pop open. There are also commercial grade popcorn poppers that also use hot oil to create popcorn but unlike cooking on the stovetop, can pop a large amount of popcorn in a relatively short amount of time.

Regardless of how you enjoy your popcorn (salt, butter, sugar, etc.) the base popcorn starts at the same point – the kernel.