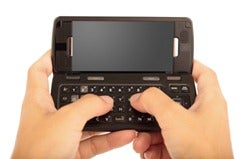 If your IM, text, or BBM savvy ends with the ability to cast a vote for “American Idol,” you are out of touch with a language that is growing organically by the day. Such a techno-imitation could keep you out of the know. Make you sound like a Luddite when you ask for a translation. Show your un-coolness in a flash.

Today, if you have kids who were born IM-ing, you could easily be the recipient of an instant message or text that reads:

Don’t know what it means? Your server has not exploded. Your messages have not been converted to code by an alien hacker. You’ve simply gone down the Rabbit Hole into instant message hell. Worry not, you can get out!

The message above, when decoded, reads: “By the way, rolling on the floor laughing. Good for you! Let’s talk later. Need your opinion. Bye for now.” After a while you interpretation skills go up and you can begin to figure acronyms out. For those just starting on the text talk journey, I offer up these mainstays.

GTGB or G2GB – Got To Go Bye (for instance, when your boss is approaching)

POS – Parents Over Shoulder. This one gets a lot of use!

BRB – Be Right Back

BBL – Be Back Later

TTYL – Talk To You Later

. . . Or resume a conversation

BAK – Back at Keyboard

IOW – In Other Words

IAC – In Any Case

IMHO – In My Humble Opinion

IMNSHO – In My Not-So-Humble Opinion

OTOH – On The Other Hand

And some personal favorites

WYSIWYG – What You See is What You Get

MOTO – Master Of The Obvious

MOTOS – Members Of The Opposite Sex

And the homonyms, which do require context

MOM – My Own Mother

MOM – More Of a Moron

This is but a mere taste of a language that to my mind and my hands takes longer to type than the actual words! Oh, and one last acronym: