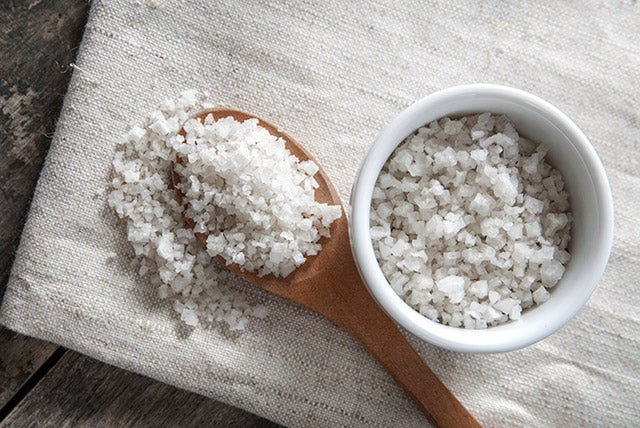 The average person eats the equivalent of 96 one-ounce bags (that’s 6 pounds!) of potato chips each year. That comes to 2-4 billion pounds of potato chips are per year in the US, and about 12 million pounds of potato chips are eaten on Super Bowl Sunday alone! Other salty snacks like pretzels and popcorn are wildly popular, so what is it about salt that gets us salivating? If you’re like me, one chip is too many and the whole bag is never enough, so here are three reasons why you love salty snacks so much.

Just like sugar, our bodies are hardwired to LOVE salt! It’s one of the elect

rolytes that helps our bodies maintain an appropriate balance of fluids (we’re mostly water after all). Until fairly recently in human history, salt wasn’t that easy to come by. So our bodies evolved to crave it so we’d eat enough when we had the chance. How often do you crave carrots? Probably not too often because we didn’t NEED them to survive in the hunter-gatherer days. Salt we NEEDED; so much so that entire cultures sprang up around natural salt deposits and became wealthy because of it. Salt was so rare and so valuable that some cultures even used it as a form of currency! In fact, The word salt shares the same root as salary, which is derived from the Roman phrase salarium, meaning to be paid in salt.

We need about a teaspoon of salt each day, which today you can easily get from a few handfuls of potato chips. But because our bodies haven’t caught up with our culture’s salt supply, we crave salt when we hit our daily quota.

Not all salt is created the same.

Natural salt contains a number of trace minerals not found in table salt. So if you’re craving salty snacks, your salt cravings could actually be the result of a trace mineral deficiency. Eating those salty snacks can temporarily relieve your cravings, but they will come back when your body realizes it’s still short on those trace minerals. So your body tells you “Eat more salt!”, actually looking for those nutrients and you reach for another bag of pretzels to try to manage your salt craving, when in reality you’re not getting the minerals you need!

Ever crave a salty snack after working out? It might seem like your body is trying to sabotage itself, but in reality when you sweat, you lose water AND salt from your body (lick your lips next time you’re sweating!) When you become dehydrated after working out, you need a little more salt to steady your electrolytes, which are mineral salts that conduct electricity in your tissues and body, and keep your body retaining the water you need. So after a hard workout be sure to drink plenty of water so your body doesn’t need that salt to compensate.

Remember, there is salt in just about everything we eat, especially if it’s a prepackaged good. A little salt is good for you, but it can be very easy to overdo it. Salt may also make your home-cooked food taste better, but I find a few chunks of bigger sea salt are way better tasting than a lot of small table salt.