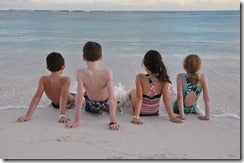 The other day in a cleaning frenzy of the kind that does not often consume me, I found a trove of forgotten photographs in the back of the linen closet behind a tangle of no-longer-used sheets. Plopping down to the floor with them, I held them, one by one in my hand – some for a long time – as I sat on the floor.

There was my handsome dad, who died when I was six, young and smiling at his reporter’s desk. In grainy black and white, my grandparents were captured in concentration over a chess board, my grandma plump and dressed in velvet, my grandfather’s full head of wavy white hair a precursor of curls found their way into my daughter’s DNA so many years later. And one of my mom, a war bride, holding a screaming me.

There was another of me – did I really do this? – sporting a pre-engagement fraternity pin on a gold sweater precariously close to the tip of my left breast, molded to a point by the anatomically absurd bra style of the time. My lifelong best friend at college, extra blond and confident looking. And one of my daughters in matching aqua and lavender knitted shorts and tops sitting on the front stoop. Why this generational mix was in a manila envelope in my linen closet, I do not know, but there they were, the entrance hall to momentary reverie.

Years ago, when photos were kept in albums, I was reading William Golding’s “The Lord of the Flies,” with my 10th grade classes. I asked them: “If you knew you were going to be marooned on an island with everyone in this class, what three things would you would want to have with you?” Everyone wrote their answers down on paper, so they would not be influenced by anyone else. Their responses were telling, and not of the food, water, medicine variety. The greatest majority had written “family photos,” with second place going to the Bible, and I cannot remember the third.

It is not a surprise. We like to look at those we love . . .at those we loved . . . and even at those whose genes we carry but never met. We take pictures for the “now” and post them online in seconds, so others can see our ballerinas, soccer stars, graduates, weddings, baptisms, birthday parties. We take photographs for the future so our kids will have chronicles of their lives and get to see what we looked like when we were young. And because we want to know that we will live on for generations, even if in the back of a linen closet.

Some tips for getting better photos of the people or places you hold dear:

· Have a camera handy all the time. When kids are used to having pictures taken all the time, they are less likely to give you a stiff, posed smile. That goes for grownups too.

· Come in close. Tight shots draw you in. Unless you are specifically taking full body shots – e.g., as in capturing a child on the ball field – less is more.

· When possible, have an uncluttered background.

· Take a zillion shots. In today’s digital world, it’s easy to do.

· Get down to a child’s level so you are looking directly at him/her rather than down on your subject. Sitting, or even lying-down shots (please, not up the nostrils of your subject) can bring some happy surprises

· The back is as good as the front. Photos of children holding hands walking away from you or a child walking into the ocean can pack a lot of emotional wallop.

· When on vacation trying to capture some of the essence of where you are, think of yourself as a photographer being paid to take “artsy” shots and focus in on unexpected elements: flip flops in the sand, a face in a window, a beautiful presentation of food, the eye of a parrot.

· Go for action shots. Get your kids in midair running along the beach or jumping into a pool.