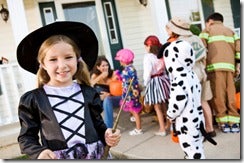 In the apartment building where I live, Halloween is a repeat performance every year. Scene 1: I buy a ridiculous amount of candy because I am always afraid I will run out. Scene 2: Half a dozen kids show up and claim the best loot of the night because I don’t want all that candy going into my mouth and onto my thighs.

In my daughter Liza’s town, half an hour away, Halloween is a different story. A couple of years ago when I went there to help out, I’d open the door to masses of masks. A dozen kids at a time crowded the doorway, the littlest goblins accompanied by moms saying, “Say thank you,” “Don’t be greedy.” While my son-in-law took Remi and Chad, the two older children around the neighborhood, I stood sentry at the door.

My daughter was well out of sight. That is because Eden, my youngest grandchild, howled in fear every time she saw a scary mask. The solution was the same as it is for many a moment of drama or upset. My daughter put her in a “play bath.”

So, alone on door duty, filling open bags and plastic pumpkins as fast as I could, a terrible truth became obvious. I was running out of treats. Fast. I scribbled a note saying, “Back in a few minutes,” taped it to the door, and ran out for replenishments. Unfortunately, I ran out without a house key. Or my phone. Or a sweater on a very cool night. When I came back, I discovered that the remote garage door opener I had was dead out of juice.

With what seemed like half the neighborhood watching, I pounded on the door, rang the bell, made the dog bark her head off, but did nothing to move my daughter to come to the door. I borrowed a mother’s cell phone to call my daughter who did not pick up. The bathroom at the back of the house where Eden was splashing and singing, the water running, and the music playing, rendered her deaf to the rings, the calls, the barks, the pounding on the door.

Freezing, I ripped into the bags of candy to sate the waiting group and then, desperate to gain entry, I walked around the house thinking I’d knock on the window, gently so as not to scare anyone. I was met by impenetrable, scratchy bushes through which I stupidly tried screaming Liza’s name. I clawed my way to the window, bare arms attacked by needle-y branches, and after too many minutes, finally caught my daughter’s eye.

I took over my previous post, and bowed out of the festivities last year. This year, I can already feel the temptation that will more likely than not put me in the car to drive out and see the kids in their costumes. Then again, Liza is a crack photographer . . .

Some treats and “boos” for this Halloween:

Boo: Teenagers who come to the door without a semblance of a costume or even a smile. Better their moms should just buy them a big bag of candy.

Bigger boo: Big kids with nothing better to do than break porch lights and “key” cars.

Treat: Little kids who, when you hold out a basket, say, “How many should I take?” rather than plunging in with two hands grabbing as much as they can.

Super treat: Storeowners who have treats on the sidewalk for the town’s kids so trick or treating isn’t even necessary.

Boo: Egging anything or anyone.

Treat: Parades that allow kids to show off their costumes.

Treat: Parents who let the kids enjoy the junk food on Halloween but then commandeer it for parentally-controlled distribution at day’s end.

Big boo: Carefully carved or decorative pumpkins smashed on front porches or in front of doorways.

Even bigger boo: People who are home but do not open their doors to children.

Treat: Kids excited to be in costumes that twirl, or scare, or make them feel special in any way.

Treat: Lots of orange things in lunch boxes with “Today is going to be a great day” notes.