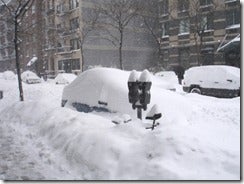 Legend has it that the Inuit have 400 words for “snow,” but that is merely legend. According to Karyn Tasens, president and CEO of Translation Aces, they have no more words for the white crystals than do speakers of English. Counting generously, linguist Steven Pinker experts can come up with about a dozen, a number weather forecasters are expanding with new terms ranging from “wintry mix” to “snow event.”

New snow, gently wending its way Earthward or swirling and blowing amidst tree limbs bending almost to the breaking point, is awe-inspiringly beautiful. If you are inside to watch it. If it melts the next day. If you live to ski. If you live someplace where it is a rare event.

Sunday was New York’s first major blizzard this year. Twenty inches. Not much if you are from Utah, Iowa, North Dakota or Montana. Or, for that matter, from Buffalo – places where the snow is expected. In the NY metro area, there is never enough equipment, manpower, salt or sand. There aren’t a sufficient number of emergency utility repair trucks. If you need to get to a hospital, it’s a big uh-oh.

Turn on any television station here and people from NYC’s outer boroughs – the foreign lands of Staten Island, the Bronx, Queens and Brooklyn – are in a state of total disgust. Tax-paying citizens can’t get to the hospital. Ambulances can’t navigate streets yet to be touched by a plow 48 hours after the blizzard ended. Mayor Bloomberg counsels “patience” and that “yelling and screaming don’t help.”

And here’s something else about snow. It can turn intelligent children’s brains into mush. Case in point: My older daughter once called from the University of Albany. “My car is stuck half in the driveway and half out and I can’t move it,” she said. “What should I do? Also, how do I know if I have frostbite?” What, I wondered, did she think I’d be able to do other than worry about her from hundreds of miles away? Did the snow trigger the “Time to worry my mom” gene?

My younger daughter once reported from the University of Buffalo: “The city of Buffalo is closed today.” What does that even mean? I thought she was imitating a “Candid Camera” prank we once watched in which a roadblock was set up on a major artery that crossed the border into Delaware. “I am sorry,” the actor said to drivers as they drove up, “but the state of Delaware is closed today.”

Those with a much better snow attitude than mine this school vacation week are cross-country skiing down Madison Avenue, making snow angels in the yards of suburbia. Adding sugar and flavoring to freshly fallen snow to make snow cones. Making colored ice cubes and hiding them in the yard for a scavenger hunt. They are fashioning snowmen, romping with their dogs, sledding down any hill they can get to. As for me. I’m hunkered down waiting for the big melt.