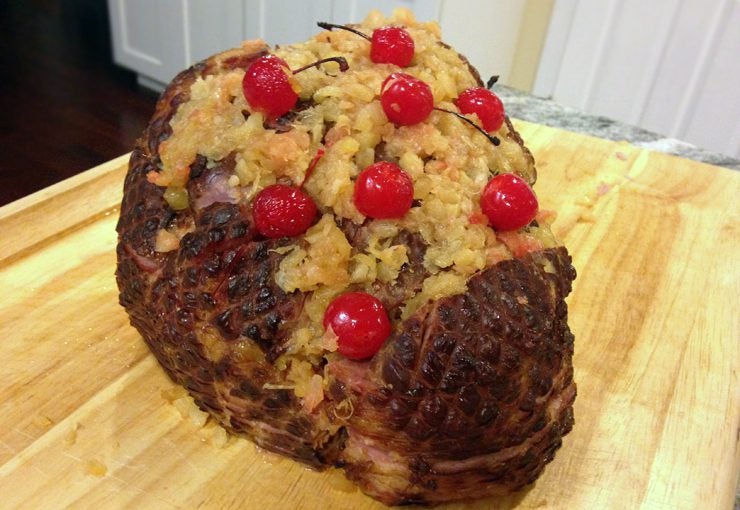 I set out to make this ham in the crockpot, like the original recipe called for. However, sometimes life gets in the way of your plans and I didn’t have 6 hours to wait for dinner. Given that I’m pregnant I can’t wait until 9 or 10 PM to eat! So I modified it and turned it into baked ham with a pineapple brown sugar glaze and it came out delicious.

My ham was quite large – a fully cooked 10 pounder. You can easily adjust the cook time and the glaze ingredients depending on the size of yours. Just cook it 18 minutes per pound. The great thing about fully cooked hams is just that – they’re already cooked! So really all you’re doing is warming it up and adding some nice flavors with the glaze.

This baked ham recipe is a nice variation on the classic version we always had growing up – with pineapple rings and cherries adorning the outside of the ham with toothpicks. I think this version with crushed pineapple is easier, but it’s not quite as decorative. I also think that the pineapple flavor infuses even more when you use crushed (and scoring the fat helps the juices to seep in).

Whether you cook this dish in the crockpot or turn it into baked ham like me, everyone at the table will love it!

Adapted from The Magical Slow Cooker