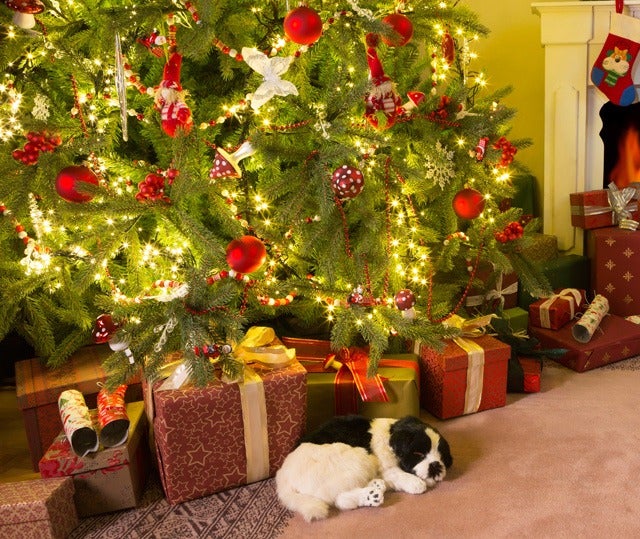 Don’t you just love the smell of a real Christmas tree? Although I always had a fake tree growing up, I started putting up real trees a few years ago and can’t imagine ever going back to plastic! I personally set my Christmas tree up the weekend after Thanksgiving so I can enjoy it for the whole month of December. Once it’s up, that’s when I really start getting into the Christmas spirit (no matter how early the stores start decorating!). But even though every public park, store and hotel lobby has its own Christmas tree, where did this holiday tradition come from?

Like many modern religious traditions, Christmas trees have their roots in pagan folklore. Ancient peoples hung evergreen boughs over their doors and windows during the winter months, as it was believed that evergreens would keep away witches, ghosts, evil spirits, and illness. Since December 21st is the shortest day of the year (the Winter Solstice), evergreens also symbolized that summer and green plants (and therefore survival) would come again. The ancient Egyptians, Romans, Celts and even the Vikings used greenery to decorate during the Winter Solstice.

Sixteenth century Germany is credited with starting the Christmas tree tradition as we know it. It is a widely held belief that Martin Luther, the 16th-century Protestant reformer, first added lighted candles to a tree in an attempt to mimic twinkling stars. Eventually German immigrants brought their Christmas traditions, including the Christmas tree, to the United States. The first record of one being on display was in the 1830s by the German settlers in Pennsylvania, but even as late as the 1840s Christmas trees were still seen as pagan symbols and not accepted by most Americans as part of their holiday festivities. The Puritans of New England, for instance, rejected the “heathen traditions of Christmas carols, decorated trees, and any joyful expression that desecrated that sacred event. Since Puritans were the first Americans, their approach to acceptable Christmas activities dominated the American mindset until 1846, when the popular British royals, Queen Victoria and her German Prince, Albert, were sketched in the Illustrated London News standing with their children around a Christmas tree. Suddenly Christmas tree was in-fashion!

In the early 20th century, Christmas trees were primarily decorated with edible goodies like cookies, apples, nuts, and popcorn garlands. Once electricity became commonplace the candles were replaced with Christmas lights and publicly decorated trees starting appearing across the country!