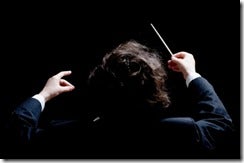 This is part of a longer opinion piece published in Newsday on Wednesday, January 13, 2011.

Until five years ago, when he won top prize in a Mahler conducting competition in Germany, Gustavo Dudamel was unknown on the world stage. Today he is classical music’s rock star.
Long curls flying, the 29-year-old conducts not only with his baton but with his eyes, his mouth, his stance, with every body part it seems. Sometimes, it appears that the podium is not large enough to contain him.

I know this because I watched him conduct music by John Adams, Leonard Bernstein and Ludwig Van Beethoven this past Sunday in the Port Washington Clearview movie theater. Dudamel is conducting his heart out in this, his second season as musical director of the L.A. Philharmonic but he got his start in Venezuela’s el sistema program.

Founded by Maestro José Antonio Abreu, el sistema is a nationwide music program based on the belief that where there is culture and music there will not be guns. That where material poverty is dauntingly severe, there need not be cultural poverty. That giving all children the chance to be part of a real orchestra provides for many their first feeling of community and accomplishment.

I’m not sufficiently musically sophisticated to determine if Dudamel’s interpretations on Sunday were A+, whether he got the best out of the bassoons, the sweetest or most strident sounds from the strings as needed. I don’t know if Bernstein would have applauded the young maestro’s version of his first symphony, whether an errant flute tooted when it shouldn’t have, if Beethoven would, indeed, have rolled over.

But I can see. And I can count. And I was saddened to the core that the theater, save for two dozen or so others souls who, like me, got two bucks off the $20 ticket for having lived to a certain age, was empty.

I know, I know. Listening to an orchestra in a movie theater doesn’t hold much sway when important football games are on. And surely it lacks the glamour of the concert hall, the titillation of eyeballing interesting-looking concert-goers, the electricity that ripples through the air at a live concert.

But it offers so much: a chance for music students to watch real pros play, an opportunity to open the minds of middle schoolers to the world beyond Lady Gaga and Justin Bieber, a chance to see the conductor’s front rather than his back.

In the case of the Dudamel simulcast, it also offered an opportunity for kids to see that conductors are cool — Angelinos call Dudamel the Dude — which can go a long way in turning kids on to something that might ordinarily elicit a disgusted “Eeeew.”

I got the feeling in that near-empty theatre on Sunday that as a society we are not milking the opportunities available to both support and enjoy the arts. In Abreu’s words, “Whoever creates beauty by playing an instrument and generating musical harmony begins to understand from within what essential harmony is … human harmony.” Think we could use a little more of that?